The successes of the programs we fund can be found in the stories of the children we have impacted. These stories represent the hope, drive and ambition that is instilled in these children, which in turn will make them strong members of their families, communities and the society at large. 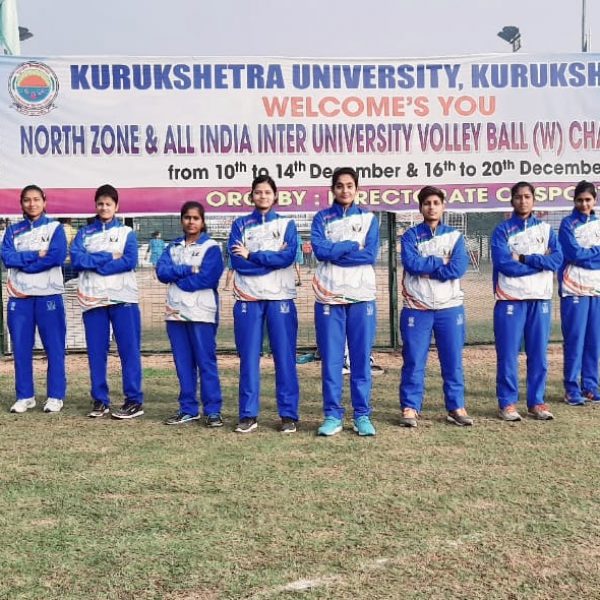 “Household chores are the only job of girls and kitchen is their only performance arena.” goes a famous saying in Shruti’s village. Two years ago no one in Tilapta village of western U. P. would have predicted that this shy 15-year girl could ever be a sports champion. ‘My life changed for all good after I joined Udayan Shalini Fellowship’, recounts an emotional Shruti, who has personally gone through the pain of poverty, and yet has always wished she could do more for girls in her community.

Shruti hails from a rural family. Her father works in a cycle shop and struggles to make both ends meet. Her mother is a homemaker who looks after Shruti and her two sisters. She is determined to support her daughter in achieving her dream and ensures a glass of milk for Shruti despite all financial constraints. Shruti remembers her pre-USF days and says, “Earlier I was living my life, just like any other girl of my village. USF has added meaning and a goal to my life. Now I am more aware of the available options of education and career. My father was not open to educating me after Grade 10. Still, now he is supporting me in my higher education, thanks to my mentor Mr Deepak Sharma and the USF Greater Noida team who helped us immensely in changing the beliefs of my father. The mentor continuously counselled and guided me to work hard towards fulfilling my dreams. The financial help from USF, Udayan Care has immensely assisted me in continuing my studies.”

Owning a keen interest in wrestling, she derives her inspiration from local world wrestling champion Babita Phogat. She is an active participant of sports like volleyball and wrestling. She earned a silver medal at college-level wrestling. She is equally good at academics and scored first division marks in her Grade 10 and 12. She dreams of becoming a physical trainer and supports needy children by giving voluntary sports coaching to needy children of her neighbourhood. 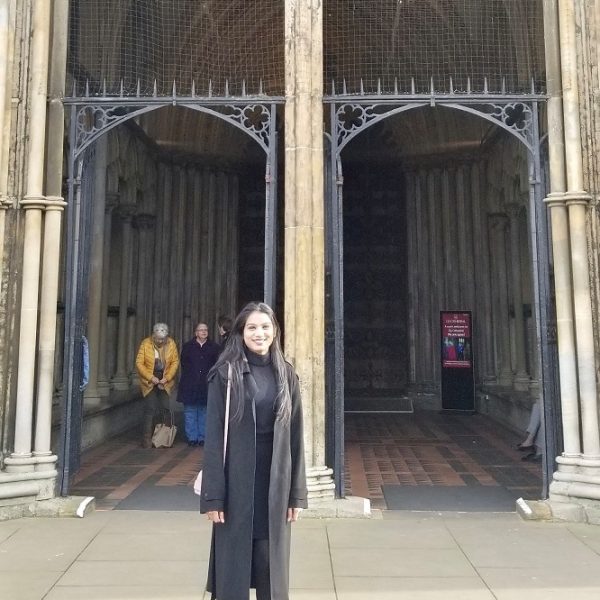 Growing up in a small family in Delhi, the odds were against Swati from a very young age. Her father is the sole earner and struggled to make ends meet for the family. Despite her intelligence and conscientious nature, limited resources were available for her education.

Although her parents did not receive a proper education, they did their best to support her in all possible ways. But higher education was a luxury they couldn’t afford. The family’s financial situation worsened further when Swati’s mother started struggling with an intestinal ulcer. However, it was around this time that Swati heard about the Udayan Shalini Fellowship Programme. Swati worked very hard and was selected for the USF programme in 2009.

Swati says with happiness, “It was a proud moment for my parents and me when I got the award for fellowship at the induction ceremony”. Over the next five years, she became more optimistic, fearless and confident. She voices her gratitude and says, “I received guidance regarding the various career options and ways to pursue them. It gave me a platform to meet aspirational minds from different backgrounds and an opportunity to learn”. After the completion of her undergraduate studies, Swati dared to take a gap year, which enabled her to understand the path she wanted to follow.

Her scientific bent of mind and aspiration to excel in researches took her to the Cambridge University for higher studies. Now, Swati is pursuing a PhD in Medical Genetics from the University of Cambridge and aspires to become a researcher and find a cure for neurodegenerative conditions like Alzheimer’s. She credits much of this to her mentor “didi” (sister) Darshana Joshi, USF’s first PhD candidate to make it to Cambridge. 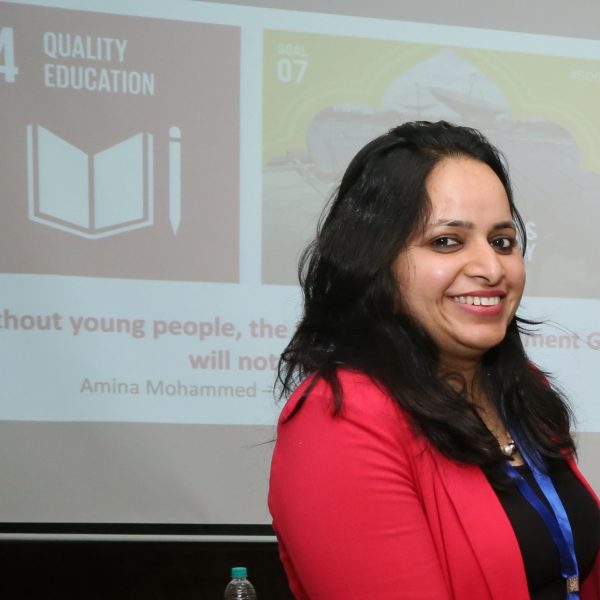 Darshana was born in a lower-income family, the second of three siblings. Her father worked as an electrician with the local government, which provided limited family resources to care for Darshana and her two siblings. Darshana’s strong potential and aspiration for higher education could not match coherently with her family’s finances. Her teacher encouraged Darshana to apply for the Udayan Shalini Fellowship at a very just time.

She idolises USF programme and says, “The constant mentoring and motivation at USF helped me secure a scholarship at Cambridge University (UK) for a PhD in Physics. My association with the Udayan Shalini Fellowship Program has been a life-changing step for me.” Once selected for USF, there was no looking back. Hard work and extensive training as an Udayan Shalini Fellow helped her earn a scholarship to the very prestigious Cambridge University (UK) for a PhD in Physics! A dream for even the most scholarly and affluent, for Darshana and her family, it is proof that determination and opportunity are the best ingredients for success.

Giving back to society is the strongest pillars of Udayan Shalini Fellowship which landed Darshana’s feet to start a journey called Vigyanshala. It is an initiative to empower undergraduates with hands-on, experiential learning opportunities in STEM (science, technology, engineering and mathematics) based skill sets. It aims to assist students from marginalised backgrounds. The programme also supports students in their transition to some of the best global universities for higher studies.

Darshana recently visited India and spoke of her journey to the current Shalinis. She is a source of inspiration to them and is so proud to be a part of the growing Shalini alumni network. 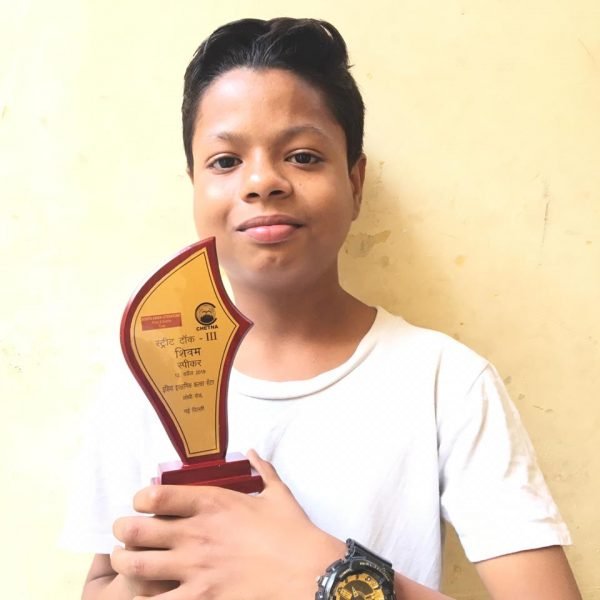 ‘Promises to keep and battles to win’ is what every child learns at Udayan Care. So does Shivam who was merely 5 when he came into the fold of Udayan Care. He had lost his father and was fighting the gravest form of challenges. From forced begging and spending unsheltered nights at the footpaths to facing all kinds of violence at the hands of an unethical man, Shivam had been through all the imaginable thins of life at a very tender age. He was finally rescued by Prayas(a local NGO) from New Delhi Railway Station.

Stepping into the warmth of an Udayan Ghar was a turning point in his life. The unconditional love of the caregivers at Udayan Ghar helped him heal his traumatic past very quickly. Soon, he regained his confidence and desire to live and study like any other child at Udayan Ghar. Now, enrolled at a renowned English Medium school, he is excelling in his academics.

Bitter times often buy you extreme confidence which helps in chiselling out your best version. That is what happened to Shivam. He gave some outstanding performances in the cultural activities regularly conducted at Udayan Ghar. His brilliant shows eased his way into making it to Matsiko World Orphan Choir, initiated by International Children’s Network (ICN) based in Seattle, USA. He took a ten-month long journey across America, which included fundraising and spreading awareness about vulnerable children through cultural performances. His story of battling against all of the odds of life proved immensely motivating for other vulnerable children. At the same time, the trip further polished his personality.

Shivam enjoys singing and outing with friends, and plans to become a Graphic Designer. Having faced all the pain poverty brings, he aspires to support those who have faced adversity as he has after he’s on his feet. 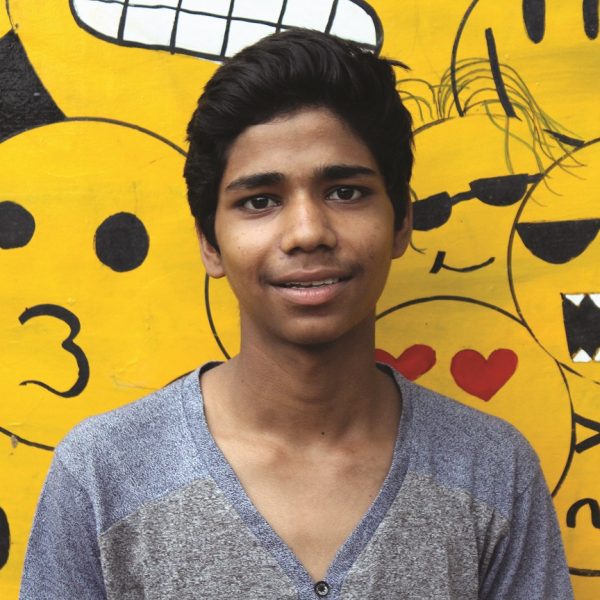 Hassan was six years old when he ran away from the Madrasa (traditional Muslim school) his parents had enrolled him in against his will. No one knew this would cost him ten years of separation from his family. His placement in multiple childcare institutions further exacerbated his early childhood trauma. In July 2017, the Child Welfare Committee sent Hassan to the Udayan Ghar in Gurugram. The Ghar team studied his past, held individual sessions with Hassan in an attempt to trace his parents and family, leading to a fresh social investigation by the child welfare officer of the Ghar. A bus trip to an amusement park in Sonepat, Haryana, was a turning point in Hassan’s story. His childhood memories were triggered, leading to a series of actions by the child welfare officer to locate Hassan’s parents. Hassan reunited with his parents on 17 September 2018. His reunion story, covered in the international press captured many hearts in the most definite form of hope and tenacity. Hassan lived in the Ghar until he was 16 years old and appeared for his Grade VIII final examination. He was restored to his family in March 2019. 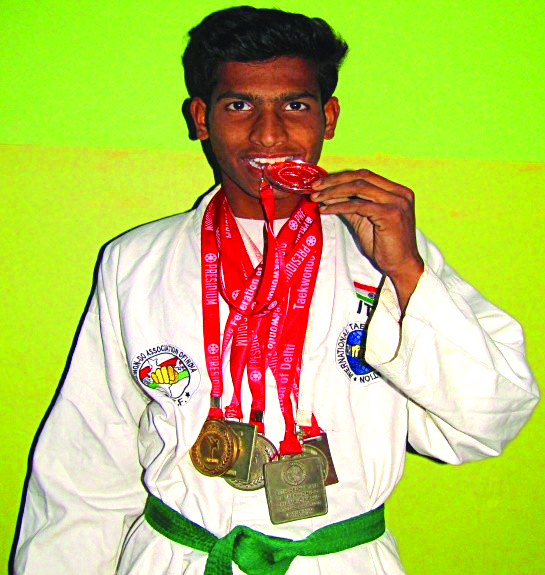 Change is not always cushioned in comfort. But, it often strikes the inspiration to set higher goals. Badal saw a bunch of agonizing changes in his life, and that too at a very raw age. He faced the bitter battle for existence along with his three sisters after the demise of their parents. His 89-year-old grandmother was struggling to care for the children and was feeling stretched to the limit when thinking about their future. They saw some of the worst, threatening shades of poverty in their early childhood, making it extremely challenging to keep their lives afloat. Badal broke into tears while remembering their frosty nights spent at Kalkaji Temple, New Delhi.

No one can ever compensate for a family, but can only show ways to come out of that pain and stand tall to life’s challenges. Udayan Care did the same to Badal and his sisters. They were brought to Gurugram UdayanGhar when Badal was just four. Initially, he was scared and found it challenging to be away from his grandmother. The pure love and sincere care of Care Givers, mentors and his brothers helped growa sense of belongingness in Badal. He began adjusting to the new environment where he grew academically, mentally and physically.

Badal aspires to become a professional Taekwondo Instructor a He believes strongly that money can only take a person so far – it is grit that makes the difference between failure and success. 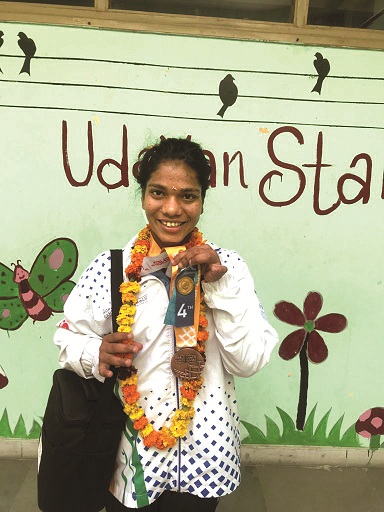 Rescued as a six-year-old girl from the streets of Delhi, Amulya, a child woth special needs came to Udayan Care in 2006. With no traces of her past or family, Amulya had deep emotional insecurities which took years to soothe away at her UdayanGhar. She was enrolled in a school for children with special needs and received specialized care for her epilepsy. Overcoming all her limitations, Amulya was enabled to pursue different sports and participated in various sports competitions for children with special needs, winning numerous awards and certificates. She had been to Abu Dhabi for the World Special Olympics, held in the month of March’19 where she earned a bronze medal in the 100 m race and bagged 4th position in 200 m race. Participation in such a grand event itself is an achievement and to win is a feat. Amulya, now a grown-up young adult, is being supported through our Aftercare Programme and is pursuing her secondary school education.